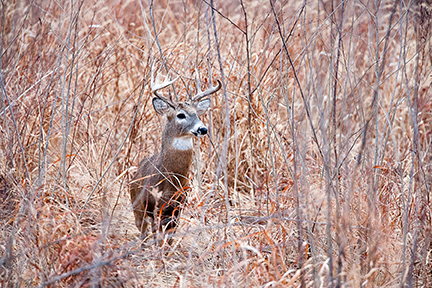 What is Chronic Wasting Disease?

Chronic wasting disease (CWD) is a neurodegenerative disease, which is a disorder that destroys nerve cells, particularly in the brain. CWD affects cervids, including white-tailed deer, mule deer, elk, and moose. It was first identified in captive deer in the late 1960s in Colorado and in wild deer in 1981. CWD has since been found in both wild and cap- tive cervids in a number of other states, including states in the Midwest, Southwest, and limited areas on the East Coast. It is also found in parts of Canada and some other countries. Once CWD is established in an area, the risk can remain for a long time in the environment. The affected areas in the United States are likely to continue to expand.

CWD is one of a number of transmissible spongiform encephalopathies (TSEs), a group of neurodegenerative diseases believed to be caused by prions. Prions are infectious, misfolded proteins that convert normal proteins found mainly on nerve cells in the brain into a misfolded form. Nerve cells containing these misfolded proteins die, resulting in a “spongy” appearance to the brain and the characteristic signs and symptoms of the disease. Prion diseases, identified in both humans and animals, are usually rapidly progressive, and always fatal.

To date, there have been no reported cases of CWD infection in people. However, animal studies suggest CWD poses a risk to some types of non-human primates, like monkeys, that eat meat from CWD-infected animals or come in contact with brain or body fluids from infected deer or elk. These studies raise concerns that there may also be a risk to people. Since 1997, the World Health Organization has recommended that it is important to keep the agents of all known prion diseases from entering the human food chain. To be as safe as possible and to decrease their potential risk of exposure to CWD, hunters should take these steps when hunting in areas with CWD.

For more information regarding CWD in cervids along with CWD monitoring efforts in Missouri, visit the Missouri Department of Conservation’s Chronic Wasting Disease (CWD) website.